Its finally Summer - hot and rainy so far as June comes to its end.  Some odd health issues have set me back a bit so while I'm feeling out of sorts with general social chatter, its a good time to catch up the blog, I think.

Painted with oil pastels from a photo reference at Paint My Photo, I chose this image solely for the challenge of getting the ice crackle to show on the pond.  Wonderful photo and a painting I greatly enjoyed attempting to render.  A bit tricky with the ice crackles! :D
"The Dancer" below, was painted from a photo taken by my daughter, Cassandra, of one of her trees in the yard, the first Spring after we all had moved into this new home.   The motion she had captured of this flower's petals just captivated me as it seemed so whimsical ... the title seemed appropriate.  Interestingly enough, I had begun this painting in Genesis Oils way back then, but if you have followed my blog, you know I was and am no longer able to sit at my desk and easel, so there it sat, dust covered, unfinished.  I wondered if I might be able to finish it in the Oil Pastels.  Yes, yes indeed that could be done.  :D


My artfriend, Dede Willingham offered free demo/classes (these can be found on her YouTube channel as well!) on how she uses her combination of acrylic and Prismacolor Pencils for portrait painting. Our mutual friend, Mandy allowed the use of her adorable daughter Amelia's photo for this first endeavour and so we began to learn Dede's process.  I used Faber Castell's Polychromsos Pencils for my version, although I did have to convert to Prisma's white as the Poly's was too translucent for what was needed.  The Polychromos are oil-based and subsequently the artist doesn't have to deal with the waxy bloom found with the Prisma's and other lines, which eventually stops one from building layers and values. 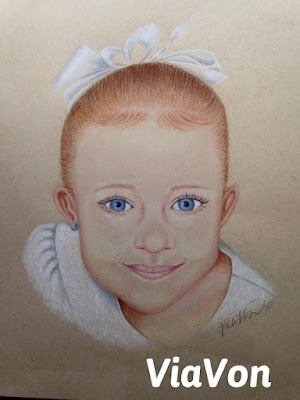 I'm continuing to study this process of Dede's but quickly realized that the FC Polychromos line do not have appropriate skin tone colours in its venue ... their flesh tones are entirely too pink and/or red for natural looking portraits so I begin to look at other lines for colours.  I studied six different manufacturers' flesh tone colours and eventually found that Caran d'Ache Luminance Colored Pencils Burnt Ochre values were exactly what I needed and wanted for natural Caucasian flesh tones.  I have another portrait almost done and hope to show it to you soon.

When not playing with the oil pastels or pencils, I have been playing with drawing and colouring mandalas.  My artfriend, Barb Owens of How To Get Creative inspired and educated us on several of her Ustream shows.  Check out Barb's Mandala eBook available for purchase at her site - its an awesome adult colouring book but she also teaches you how to be creative with several of them to make them uniquely your own.  I love that!  I've really enjoyed designing and colouring my own as well.  :D