If you're like me, you are constantly looking for ways to improve your creative work flow.   My creative center is a large corner computer desk and printer stand unit located in a corner of our bedroom.  What started out as a painting corner has now evolved to incorporate art journals, mixed media and paper crafting of all sorts!  The desk unit has adopted a three-tiered, 3-drawer 12x12 scrapbook paper organizer (which holds more than paper) and a 5-shelf bookshelf, plus two multi-bin storage caddy's ( the type used by our gentlemen in their garage! lol).  Additionally, I've had to get extra brush caddies for both watercolour and acrylic brushes along side my oil brushes.  It seems that I am constantly reorganizing things as my supplies and materials stash grow. 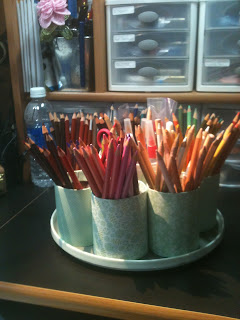 Watching my friend Jean demonstrate building a desk organizer on her U-Stream The Musical Scrapper recently, gave me an idea for a special need I had.

My Prismacolour Pencil collection has been a constant source of fuss because, for ease of use, it requires the colours to be separated by family.  I had four connected cubes, with separators inside, but for some time, its heaviness made it difficult to lift and turn around to get at colours in the two cubes at the back. I, hopefully, today have solved the problem. 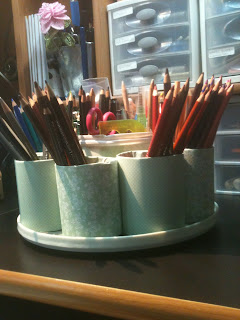 I started with a small lazy-susan, added pretty paper covering to tubes made from light cardboard and attached each tube to the other, at the sides, for stability and strength.

The center tub is a larger clear plastic container, gesso'd white and covered with a coordinating paper.  It remains as a stand-alone unit, holding all my drawing supplies as well as my Prisma blending tools, Gamsol, etc.

Since I like to sit in my easy chair at night and colour, this will hopefully be a more workable solution.  :-)  I hope my idea, sparked from Jean's organizer, will spark something for you too!

It has been some time since I shared what has been happening in my creative and/or personal world.  I thought it time to catch up with both as this is, in a way, a public diary as well as my creative diary. :-)

On June 4th, Daddy passed away.  We had been expecting it, but it is never easy to cope with the passing of a parent, and especially when its your last parent.  How does one become an orphan when one is almost 60?   My sister expressed a wish to gift the Newaygo Medical Care Facility with something in memory of their loving and wonderful care for both Mama til her passing in 2007 and Daddy til his.  I suggested that I paint something and since our parents' room had been in the Sunflower Lane wing, I chose complementary images of sunflowers from The Graphics Fairy, where Karen shares the most wonderful free images for our personal use.
The canvases each measured 11" x 14" and were gallery wraps of 1-1/2" so they would not require framing.

Since then, I've finished another oil painting that had been started late last year and gotten set aside with all the fun of the mixed media and journaling.   This was gifted to my son Todd.  Its a screen shot from a popular sci-fi type video game which he enjoys.  :-) 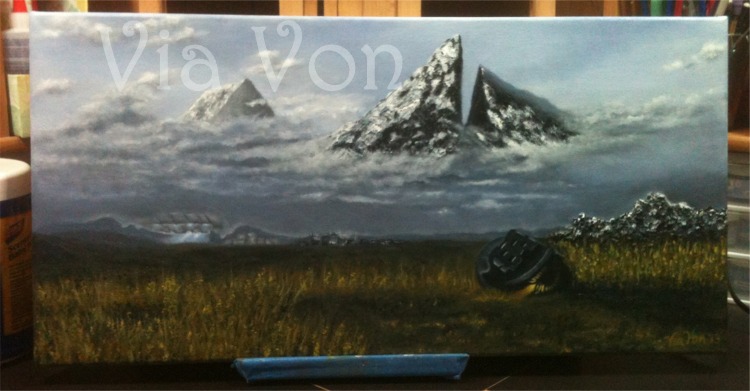 The last week of July into August, both sons and families came for a visit!  It had been 4 years since we'd all been together and this Mimi was SO ready to love on all of her kids and grandkids!  To say a grand time was had by all would be an understatement.  It was heaven.  Pure heaven. I felt so blessed to have had the time together ... but it was so hard to say goodbye.

While they were all together, here, I asked my children to select their choices of my paintings.  Our walls were filled to overflowing and Mama has more paintings in works and now mixed media I want to display as well.  ;-)  They all worked together, choosing from the surplus and each got their favourites, which worked out nicely.  These walls became happily, rather bare!  :-D :-D

I have been a busy artist making cards, art journal pages, tags, and playing for the first time with Soft Pastels (which I already adore!) but won't try to catch you up with everything.    Here's a quick look at a few:

Thank you for taking time to visit!
God bless and keep you in His care!
(((hugs)))